Juan Rodriguez Cabrillo claimed Los Angeles in 1542. Prior to this it was the home of the Tongva and Chumash. In 1781 the city was officially founded and in 1848 it became part of the United States. Today, L.A. is the second-largest city in the country and serves as the county seat for Los Angeles County. Los Angeles is a massive city divided into many smaller communities. Among them are well-known destinations like the San Fernando Valley, the Harbor Area, Westside, and Downtown L.A. Similarly, these areas are further divided into smaller neighborhoods and districts, like Westwood, Century City, Brentwood, Bel Air, and the Hollywood Hills, among others. And in the heart of Los Angeles is one of its most iconic neighborhoods, Hollywood. Hollywood is known as the hub for the nation’s film industry, and is known for its dense and extraordinarily diverse population.

Hollywood started as a small neighborhood but in 1903 was incorporated as a municipality that eventually merged with Los Angeles in 1910. Several significant motion-picture companies began production in and around Los Angeles around 1912, and by the mid-1920s, the fifth-largest industry in the country was Hollywood. It wasn’t long after that the neighborhood was dubbed Tinseltown, and it has since been the United States’ film industry hub. Today, Hollywood is home to a seemingly endless list of incredible landmarks and tourist destinations like Capitol Records, the Dolby Theater, the Hollywood Walk of Fame, and the TCL Chinese Theater. Bounded by West Hollywood on the west, East Hollywood on the east, Hancock Park and Larchmont on the south, and the Hollywood Hills on the north, this spectacular Los Angeles neighborhood also encompasses exciting housing options.

Hollywood is home to several smaller neighborhoods like Yucca Corridor, Spaulding Square, Thai Town, Little Armenia, and parts of Franklin Village and Whitley Heights, which also stretch into the Hollywood Hills community. Hollywood real estate consists of myriad attached, semi-detached, and single-family detached homes. Homes for sale in Hollywood include properties of all ages, sizes, floor plans, and architectural designs. Likewise, listing prices for Hollywood properties span a broad range. Townhomes and condos in Hollywood tend to cost a little less than Hollywood single-family homes, but there are certainly exceptions. Please, as soon as you can, connect with us and we will gladly provide you with more detailed information about the currently available properties in Hollywood in Los Angeles, California.

Our website features the best Hollywood real estate search for homes, condos, land and foreclosure properties available. It is the only site you will ever need! It is easy-to-use and updated by the official REALTOR®’s database every 15 minutes.

You can save searches, and get daily email alerts of new listings, price changes, sold data, and market reports. Our Interactive Map Search allows you to view properties on a map or refine your search by drawing the boundaries around the area you desire.

Curious about what’s happening in the Hollywood real estate market? Sign up for a Hollywood Real Estate Market Report to see what’s active, under contract, and sold!

Contact us today to find out how we can be of assistance to you!

This is a 50% interest in a duplex. We have someone that wants to buy the other half. This is in an opportunity zone and other buyer and I would like to develop it, so ...

Located in the highly sought-after Los Feliz area is this lovely condo in the heart of Los Angeles near Thai Town, Little Armenia and Hollywood. Desirable top unit with s...

Investors Dream!!! A must-see historical gem in the heart of Hollywood with much potential! This is a highly sought after 1907 Craftsman style home with plenty of curb ap...

Luxury living in the famed "Hollywood Condos" designed by award-winning architect Stephen Kanner. The Hollywood is a resort-style building with 24 concierge service, pool...

Back on the Market! Located in the very HEART OF HOLLYWOOD, just blocks from the Hollywood and Western Subway Line, this 13-unit apartment building offers a multitude of ...

Come one, come all!! Prime location triplex perfect for developers, investors, or owners who can live in the 3 bedroom unit and collect rents from the other 2 units. Plen...

The W Residences. Gorgeous penthouse with incredible views of the Hollywood Hills, modern open floorplan, and a long envious terrace. With 1 bedroom and 1 1/2 bathrooms, ...

This stunning, private architectural compound sits atop a bluff with truly the best views you will find in Los Angeles. The 34,000 square foot estate-like property consis...

Calling all investors, land developers and future home owners that want to build units, possibly condos or 2 or 3 story building. According to the property assessors this...

A calm oasis in the city. This gem of a property comes with a 6 bed/4 bath Craftsman home that is fully remodeled and still retains the charm and character of its 100-plu...

Current ownership will deliver a rent-ready and city approved studio ADU unit, For a total of 27 units. This is a great opportunity for a new investor because this legal ...

All information should be verified by the recipient and none is guaranteed as accurate by ARMLS. Copyright 2022 Arizona Regional Multiple Listing Service, Inc. All rights reserved.

The data relating to real estate for sale on this web site comes in part from the INTERNET DATA EXCHANGE Program of the Las Vegas REALTORS® MLS. Real estate listings held by brokerage firms other than this site owner are marked with the IDX logo.
LVR MLS deems information reliable but not guaranteed.
Copyright 2022 of the Las Vegas REALTORS® MLS. All rights reserved.
The information being provided is for the consumers' personal, non-commercial use and may not be used for any purpose other than to identify prospective properties consumers may be interested in purchasing.
Updated:

Based on information from California Regional Multiple Listing Service, Inc. as of . This information is for your personal, non-commercial use and may not be used for any purpose other than to identify prospective properties you may be interested in purchasing. Display of MLS data is usually deemed reliable but is NOT guaranteed accurate by the MLS. Buyers are responsible for verifying the accuracy of all information and should investigate the data themselves or retain appropriate professionals. Information from sources other than the Listing Agent may have been included in the MLS data. Unless otherwise specified in writing, Broker/Agent has not and will not verify any information obtained from other sources. The Broker/Agent providing the information contained herein may or may not have been the Listing and/or Selling Agent.

Create Your Own Market Report 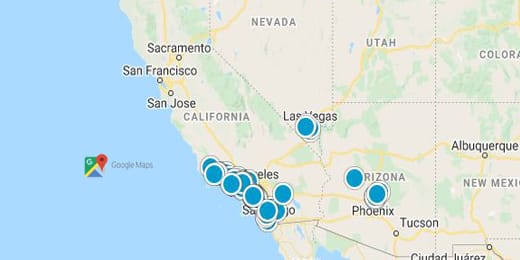